It would be a pleasure to read with you. I'm highly skilled and trained in Meisner technique (15 years and still evolving!) in addition to two years of stage training at Identity Drama School alongside John Boyega, Letitia Write and Malachi Kirby.

In addition to my extensive actor professional credits spanning stage, TV and film, the number of short films and stage productions I've directed means I'm equipped with many tools and techniques to elicit the best performance from YOU!

Self-taping/sides reading are some of the techniques I can help you with, I self tape, usually on a weekly basis, for my own auditions and bring a wealth of cumulative knowledge to share to ensure you nail your audition.

Born in Dublin, Ireland to an Irish schoolteacher mother and Nigerian father, at six weeks of age she returned with her family to Nigeria and spent her first three years there, regularly shuttling between Nigeria, Dublin, and London.

Her father was the Minister for Education in Nigeria under the administration of Aper Aku, resigning shortly before a military coup. Due to political unrest Ms. Houston-Jibo, her mother and siblings left Nigeria for London in the 1980's.

Ms. Houston-Jibo grew up in London, and attended a convent school. An avid reader, she excelled at English and drama and was a natural storyteller. However formal education proved to constraining and she left school at sixteen. She spent five years working as a Croupier in Mayfair Casinos and DJing in London Hip-Hop clubs, amongst the likes of Doc Brown and Professor Green, after which she returned to formal education attending the London College of Fashion on a course that encompassed make-up design/cultural studies/fine art and photography.

After a number of years working in production, thanks to her unique experience as a croupier, Ms. Houston-Jibo was offered a part on the UK game show Casino Casino directed by the renowned Paul Kirrage. This reignited her long slumbering ambition to act, thus she immersed herself in two years of intensive study of the Sanford Meisner technique at The Actor's Temple, London. Subsequently she has also studied with Martin Barter of the Meisner Centre, Los Angeles and undertaken a year of classical theatre training at Identity Drama School under teachers such as Clint Dyer. 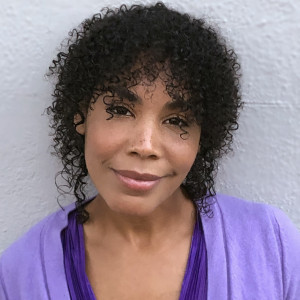