Ratnesh Dubey is a New York-based Stand Up comic and comedic actor. In 2019 Ratnesh landed recurring roles in Syfy’s HAPPY, ShowTimes’s RAY DONOVAN, and Comedy Central’s NORA FROM QUEENS. He flexed his dramatic muscles in Amazon’s feature film THE REPORT, and lead a campaign for Diesel Denim that went viral. He has guest-starred in HIGH MAINTENANCE (HBO), ALTERNATINO (Comedy Central), and SEARCH PARTY (TBS) among others. You can also catch him in numerous features such as, Going In Style, Good Time, Lost Cat Corona, Separation, Silent Retreat to name a few. For full list go to www.imdb.me/ratneshdubey

As a US citizen who was born and raised in Bombay, Ratnesh brings a unique perspective to his performance and comedy. He speaks fluent Hindi, Punjabi, Marathi and Urdu and is conversational in Bengali and Gujarati. Ratnesh started his career in New York as a stand-up comic and regularly performs in clubs around New York City. Visit his website at http://www.ratneshdubey.net/

Ratnesh Dubey is a New York-based Stand Up comic and comedic actor. Ratnesh moved to New York and from Mumbai and found his calling to become a Stand Up Comic. He soon broke into hilarious performances spreading laughter in clubs and colleges in New York and other cities. While some laughs he got from his jokes, most he got from his unique style. Well, his style and his dazzling smile (ref the cute dimple in the headshot) were soon discovered and he was cast in numerous commercials, television spots, and films. He is known for his Webby award-winning five minute commercial for British Airways - Visit Mum (Over two million hits... Google it!). He is a Guest Star on the hot show - High Maintenance; currently airing on HBO. Ratnesh has done many Guest Star roles in recent blockbuster movies such as - Going in Style with Morgan Freeman and Lost Cat Corona with Ralph Macchio to name a few. He will be seen in Good time with Robert Pattinson and Private Life with Paul Giamatti. 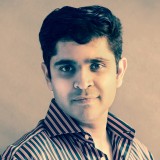