Marci Fine was a reader & host at Actors Connection in NYC for many years. She also read for the Blind at the Lighthouse in NYC. She's a voice-over artist voicing commercials, narrations & promotions since 2006.

Marci Fine is an actress, producer& voice over artist known for Tango Shalom (2021) where she plays Lainie Kazan's daughter (The movie is currently in film festivals). Person of Interest (2015) where she plays a News Correspondent (She used to be a News Anchor/Reporter) and 79 Parts (2016) where she's a hooker. The short films she produced that made it to festivals include The Unexpected (2016) where she portrays a businesswoman and Rock 'n Roll Ghost Town (2014) where she's an NYU Professor. She also made an appearance as a Kardashian Christmas Caroler in SNL's (2013) Christmas episode. She is also a voice-over artist and has voiced thousands of projects like Buick, Renaissance Hotels, 23 and Me, Pandora, Kahlua, MasterCard, American Women's College, Denso Japan, The Orange Bowl, ETS, Cuddle Duds, Mount Sinai Hospital, Lassie Come Home, Doc McStuffins, Nothing Stays in Vegas by Elena Aitken as well as Daniel Black's The Death of Magic, Saga of the New Gods and God War among many others. She lives in Northern New Jersey. 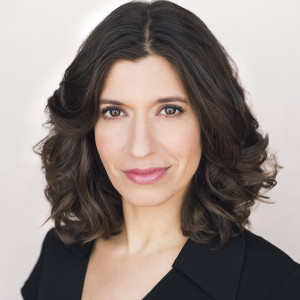