Hello there! I am a British actress based in London, trained at drama school for three years and have five years experience as a professional actor. In that time I have had to do many self tapes for my own auditions and for friends, and have always seen it as a chance to act and be present with whoever I am reading with.

I attended the Manuel Puro self tape course on Spotlight, and since lockdown have developed a newfound respect for the art of self taping.

Patience is an essential part of the process, and I will always give you as much time as you need, and only give you tips and advice when asked.

I look forward to auditioning with you!

Freya Warsi began her professional acting career after graduating from drama school in 2017. She has since starred in various short films, plays, music videos, commercials, written and performed her own one woman shows, and released her own audiobook podcast over lockdown.

Freya also sings and plays percussion in a band (Dan Lyons and The Tenants), who have toured around Europe and America, playing at SXSW Festival and venues such as The Paradiso in Amsterdam, The Bataclan and Le Pop Up Du Label in Paris, The Windmill in London and The O2 in Bristol.

Freya is signed to KBPM, and Das Deck modelling agency in Vienna. 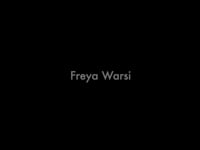