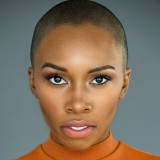 Carrie's energy is undeniable. So much fun to work with & read with. Thank you for your time, tips & energy. "