Hi, I am a Chicago native actor. I have over 10 years of acting experience. I do on camera, theatre and voice over work. Thanks to my Mexican roots, I speak Spanish fluently.

I would love to read for your next self tape. Wether it's for an audition or for a class, lets make the best of it and have fun along the way!

Veronica Mora is a Mexican-American actor, model, and voice-over artist made in Chicago. Most recently, she worked on the mystery film Silent as the Grave and starred in the feature film, El Frio Silencio set to premiere in 2024.

Early in her career, she attended a modeling and on-camera training program that cracked the door to the world of acting. Since then, Veronica has developed at various acting institutions across the US and Mexico. She attended The Gately Poole Conservatory in DeKalb followed by training at The Lee Strasberg Theater and Film Institute in New York City. Most recently, she attended Casa Spanda in Mexico City and continues to train with Kennedy Brown on physical acting and voice deconstruction.

Her on-screen credits include Power Book IV:Force (Starz), you may have also seen her on Chicago PD (NBC) and Chicago Fire (NBC). She played the lead in the short film Genesis, selected as part of the 2022 Chicago International Reel Shorts Festival. She also appeared in Alma, which premiered at the 2016 Chicago Latino Film Festival, has been screened at numerous film festivals across the U.S. and was awarded a Silver Palm at the Mexico International Film Festival. On stage, she was cast in 16th Street Theater’s rolling world premiere of X-mas Cuento Remix written by Maya Malan-Gonzalez. Veronica understudied and performed in La Havana Madrid for Teatro Vista and Collaboraction. She gave life to Jenny Ramos in Los Secretos de Santa Mónica at the Orpheum Theater in Phoenix and later reprised her role in La Boda at Chicago’s Chopin Theatre.

If you listen closely, you can also catch Veronica’s voice in TV and radio commercials for Indeed, Colorado Lotto, and Target. Outside of work, she likes to spend her time lifting heavy weights at the gym, covering her current favorite songs, pampering herself with DIY manicures and being an unofficial therapist to friends, family and her rat terrier Finito. 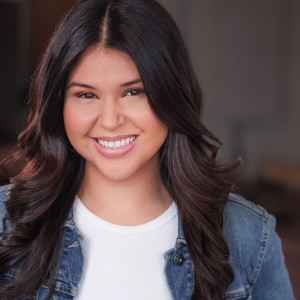