Hello! I'm Thomas Ochoa (he/they) and I am a Gender Fluid + Latinx performer based in Los Angeles, known for my ability to portray characters across the the spectrum of gender and sexual orientation.

I am a scripted comedy specialist, and I have studied extensively at both The Upright Citizen's Brigade Theatre and Actors Comedy Studio in Los Angeles.I earned my B.A. from Arizona State University, and have been a working actor and member of SAG-AFTRA since 2014.

As a queer performer, I am very familiar with how gender dysmorphia can affect your approach to character work and auditions. I'm happy to coach any other LGBTQIA+ performers who may be struggling with this as well.

To schedule a session in advance, feel free to DM @TeeOcho on Instagram.

Thomas Ochoa (he/they) is a Gender Fluid + Latinx performer, known for their ability to portray characters across the the spectrum of gender and sexual orientation. Classically, being able to flow through the "comedy/drama" binary has been the mark of a great actor. While adept at this himself, Thomas is also pushing the boundaries of another classic binary - male/female. But rather than merely playing both sides of the binary, Thomas excels at and strives to operate outside of it entirely. They look forward to playing roles that will challenge the idea of the "traditionally male" or "always female" part.

His notable credits include iCarly (Paramount+), The Neighborhood (CBS), Twenties (BET) Home Economics (ABC), Reasonable Doubt (Hulu), 9-1-1 (Fox), and Me Time (Netflix). In addition, their versatile drag persona Pocket Turlington is specifically calibrated for scripted on-camera work and is featured in the feature God Save The Queens, which premiered on the East Coast at the 2022 Tribeca Film Festival and on the West Coast at Outfest 2022.

Thomas is a scripted comedy specialist, having studied extensively at The Upright Citizen's Brigade Theatre and Actors Comedy Studio in Los Angeles. Prior to escaping to the coast they earned their B.A. in Architectural History from Arizona State University. 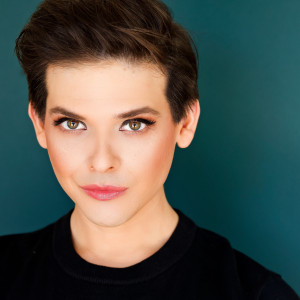