Hi there! My name is Shanta and I'm a bicoastal screen, stage, and VO actor originally from the DC area.

I specialize in both drama and comedy and most recently played Special Agent Brindi Arya on CBS's FBI: Most Wanted.

I have a B.A. in Theatre/Drama from Indiana University, have trained with Ken Schatz (2014-present), Jamie Castro, Shannon Bills, Matt Newton Studio, and Upright Citizens Brigade.

Happy to give adjustments/suggestions if it's helpful for you. I really love connecting and collaborating with other artists. Let me know what you need!

Shanta Parasuraman is a bicoastal actor, singer, musician, and writer. Most recently she starred on CBS's FBI: MOST WANTED as Special Agent Brindi Arya opposite Julian McMahon.

Her regional credits include THE WOLVES (Helen Hayes Winner) and WHITE PEARL at Studio Theatre, the national tour of THE BUDDY HOLLY STORY, and several independent and short films.

She is the creator, writer, and star of the comedy series "DTF." She has played piano and guitar since age 7 and also has skills with bass, ukelele, saxophone, and drums.

She has a B.A. in Theatre/Drama from Indiana University, has trained with Jamie Castro, Shannon Bills, Van Hansis, Ken Schatz (2014-present), Heidi Marshall, and Upright Citizens Brigade (Ongoing Improv Study). She is a dual citizen of the US & UK. 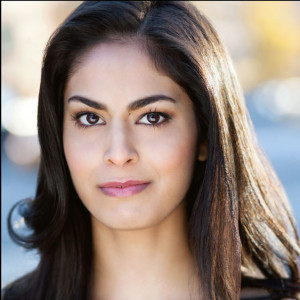 Shanta is an Awesome reader! I needed help with comedic scenes and I knew she would be incredibly helpful! She didn't disappoint, quite the opposite actually! Great actor, lovely human! Thank you! "
"

Excellent. Was able to break down the scenes very well! "
"

Shanta is so awesome; patient, full of great ideas & so great to play a scene against. "
"