Hello! Lovely to meet you :)
My name is Ronya and I am an actress, currently based in Spain.

Acting has always been my passion and I grew up singing, dancing and performing on stage. I graduated Drama at Queen Mary University of London in 2017, studied Acting for screen at the Nu Boyana film studios and I am still developing as an actress here in Spain. I am experienced on stage and screen and I have also created my own theatre performances, collaborations and art projects.

I believe in the importance of the community and I am thrilled to be part of WeAudition. I would love to read with you, no matter if it is for a rehearsal, self tape or even if you just want to chat with someone from the industry – I love meeting new people and hearing about their journey! So don’t hesitate to contact me and don’t worry if you need some extra time - I will happily work with you until you’re satisfied with the result. I don’t charge a fee, but a tip is of course always welcome. I speak English, Spanish and Bulgarian fluently and even though I don’t naturally have it, I can help you out with Eastern European accent ( In English and Spanish), or English accent (in Spanish and Bulgarian).

Thank you and best wishes,
Ronya!

Ronya Bozhilova is a Bulgarian born actress. She discovers her passion for the stage very early on in her life and after years of performing as a hobby, decides to pursue acting as a professional career. She graduates Drama at Queen Mary University of London, where she creates her own theatre performances and gallery installations based on variety of topics such as gender equality, cultural appropriation and mental health. She then goes onto studying acting for film at the Nu Boyana film studios and later continues her acting journey in Spain, where she is currently based. Her latest appearances are in La Mancha Negra ( The Black Stain) directed by Enrique Garcia and El Ultimo Piso (The Last Apartment) directed by Diego de Bonis, which was recently presented on the latest edition of Cortos de Vista film festival. 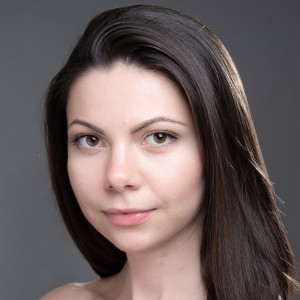 Thank you Ronya! You were great! You gave me the space and energy I needed to connect with my character and to simply have fun with it! It was really good! Thank you! "
"

Thank you Ronya! This was an amazing session, really fun and I was able to explore a lot of different things for this scene! I really appreciate it! "
"

Ronya is a wonderful reader! She helped me try some new ideas for a scene I'm working on. "