Hi guys, my name is Roberto. I was born in Havana, Cuba and raised in Miami, Florida. I have been a producer, writer, director and actor for about 19 years.
Before becoming an actor, I was in the US Military. I served 11 1/2 years in the Navy. I am also a Desert Storm Veteran. After leaving the Military in "96", i moved to Atlanta to pursue a career as a professional model (don't ask)!! Lol.
In the 5 years I lived in Atlanta, I was fortunate to book over 200 fashion shows, numerous print jobs and over a dozen local and national commercials.
A short time after returning to Miami to work in the Latino market, I landed my first "acting" audition (commercials don't count). Lol .
The audition was for a little film titled ... 2 Fast 2 Furious. The rest is history!
Aside from working as an actor these last 20 years. I've also been fortunate to help coach young and seasoned actors all across the country. It has been an extremely rewarding experience helping others achieve their dreams.
If you need some help with an audition, self tapes or career advice, feel free to email me in advance at esecubanito@gmail.com
I'd love to work with you, R

Source: IMDB
In the fall of 2002, while working as an armed officer for the Miami Metro System, Roberto Sanchez received a serendipitous phone call that would forever change his life. Only moments earlier he had encountered a belligerent passenger who refused to stop smoking on the evening commute. The phone call was from his agent, apparently respected film director John Singleton had just cast him as one of the leads in 2 FAST 2 FURIOUS, the second installment of the Fast and Furious franchise. Roberto co-starred along side of actors Paul Walker, Tyrese Gibson and Eva Mendez.

Since his breakout role in 2 Fast 2 Furious, Sanchez has become a reliable, eclectic performer in a variety of roles and platforms over the years. Roberto has shown his phenomenal range as an actor by portraying duel roles as "Larry/Lola" (a cross-dressing singer), in the stage production of HOLLYWOOD & LEVINE. Roberto also received "Rave Reviews" for his portrayal of "Rooftop" (a role previously played by Laurence Fishburne in L.A.) in Gloria Gifford's stage adaptation of OUR LADY OF 121st STREET, also in L.A. Sanchez, was the first "non-African American" to play "Rooftop" in Stephen Adley Guirgu's play. Roberto also landed the much coveted role of the "Intellectual/Scholar" Paul Verall, in Garson Kanin's stage play, BORN YESTERDAY, also performed in Los Angeles.

In TV and Film, Sanchez has also shown that he can transform himself into a variety of different characters. From the "Nerdy" psychologist, Don Mcpherson in CBS's WITHOUT A TRACE, to his recurring turn as the "Commandeering" Swat Commander in NBC's THE NIGHT SHIFT or even as the "Ruthless Gang Leader", Baron Salva in CBS's TRAINING DAY, opposite the late, Bill Paxton.

The 2015 IMAGEN AWARD NOMINEE (Sanchez was nominated for an Imagen Award for his exceptional performance in the film, LAKE LOS ANGELES), has been considered somewhat of a "closer" as of late with 3 straight season finales. Roberto has come in to close out shows like Hulu's SHUT EYE, USA Network's QUEEN OF THE SOUTH and then NBC's LAW & ORDER: SVU!

Roberto recently wrote, directed and starred in the multi-award winning film, THE TERMS OF US. Critics have praised the film as "An inspiring film that goes deep into the heart" - Top Shorts, "Sanchez makes a remarkably intelligent and assured directorial debut" - Herald De Paris and "The Terms of Us is a little film with a giant punch" - Dr. Ron Show.

Before deciding on a career as an actor, Roberto distinguished himself in the Navy as a Desert Storm veteran, was a Virginia Beach military police officer, competed professionally in the highly touted European league as a Naval basketball player. He became a successful print model then eventually an actor.

How ironic that Roberto's decision to answer his cell phone rather than to confront a combative commuter launched his career. 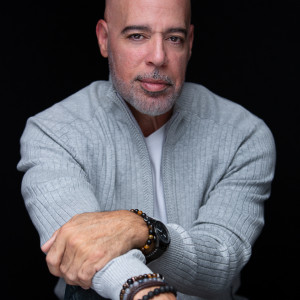