Hi! My name is Rakefet Abergel and not only have I been an actor for over 30 years, I have also worked extensively as a casting director and acting coach for more than 15 years.

I would love to help you hear the words out loud and find your character's voice. I love to read with actors and although this isn't a coaching session (for which I usually charge a lot more), I probably will do a little bit of coaching if you're up for it! I believe I have an eye for talent and for pin pointing what's working and what isn't. Let me help you crush that audition!

As an actor you may have seen me in Superbad, on iCarly, Shameless, or as Adam Sandler's sister in Just Go With It.

I was the casting associate for Nacho Libre at Paramount Pictures and a freelance casting director on multiple short films, one of which made it into Sundance Film Festival. I also own my own acting school called The Kid (F)Actor - for kids and kids at heart! (www.kidfactorla.com)

I wrote, produced, and directed (as well as starred in) two award-winning short films that can be seen on Amazon Prime, Alter, Vimeo, and DVD anthologies sold everywhere.

If I'm offline feel free to email me at cyclamenfilms@gmail.com to set something up!

A native of Los Angeles, Rakefet Abergel is an award-winning American/Israeli actress, writer/ producer/director, and outspoken stand up comedian. One month after taking a stand up class, Rakefet won Best Comic and Best Overall Talent on the Tyra Banks Show. She appeared in the movie Superbad with Jonah Hill, and as Adam Sandler's sister in Just Go with It . She can also be seen in the films My Best Friend's Girl opposite Dane Cook, with Halle Berry in The Call, and alongside Eddie Murphy & Kerry Washington in the film, A Thousand Words.

Rakefet regularly guest stars on TV shows including Showtime's Shameless, New Girl, My Name is Earl, Bella and the Bulldogs, and iCarly. For a laugh, check her out as the crazy lady who shoots up her own living room over a good deal, on the hilarious commercial for Kayak. She was also a series regular on two popular web series, Breaking Fat and Addicts Anonymous.

Rakefet’s directorial debut, horror short film Boo, which she also wrote, produced, and starred in, won her multiple Best Director and Best Female Filmmaker awards, including the Minerva Award at Filmquest. The film also won Best Writing in a Short and over 40 additional awards across the board. It screened at more than 70 festivals including the Oscar-qualifying HollyShorts Film Festival and the prestigious NewFilmmakers Los Angeles. It is currently being distributed by ALTER.

She teaches sixth and seventh grade religious school and Hebrew in Los Angeles and also works as an acting coach and mentor for kids and adults at Kid (F)Actor, a company she founded in 2010. 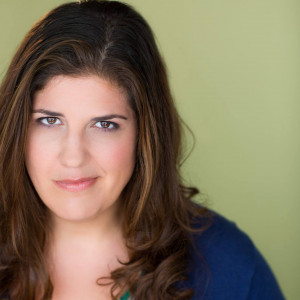