She works from the perspective of tapping into the emotion first, and will encourage your listening & reacting based on what is happening in the moment.

She's very comfortable with improv as well, if that's what is needed to get you to that sweet spot.

Pixie Indigo is not just the World Cussing Champion, but also an American Academy of Dramatic Arts alumna. She’s an actress, writer and creator. Pixie also enjoys the art of live storytelling, she even performed in LA at the famed NPR storytelling event - The Moth.

Pixie is proud to call herself an Artivist- continually striving to create art and tell stories that are either grounded in humor, or aid in giving a voice to Women and the LGBTQ+ community. She believes in belly laughs, equality, embracing your weird, and love for all. 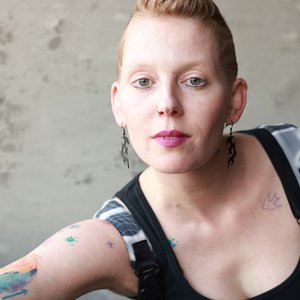 PIxie is so open and so much fun to play with!!! Definiely book her "