Nora is a native German and fluent French speaker and can also speak English with various foreign accents.

When not on set, Nora is a Certified Travel Advisor and owns her boutique travel agency Travelkunst LLC.

Nora Sommerkamp is an actor, model and voiceover artist. She was born and raised in Freiburg, the heart of Germany's scenic Black Forest region and currently resides in New York City.

She studied Method Acting at the prestigious Lee Strasberg Theatre & Film Institute in NYC and is a proud member of the Screen Actors Guild SAG-AFTRA.

Nora was a model throughout season 17 & 18 of Project Runway on Bravo. She is also known for her appearance in the movie "Isn't it Romantic" and her supporting role as a Russian underground boxer in the short film "Girl Boxer".

Her work has been published in many prestigious magazines like ELLE USA and VOGUE Italia. She has walked in numerous runway shows and showrooms such as Malan Breton, Christian Siriano, Tadashi Shoji, Norman Ambrose, Tommy Hilfiger and Betsey Johnson and has been featured in ad campaigns by Wella, L'Oreal, Joico, IBM, Southwest Airlines, AT&T and Oral B just to name a few.

Aside from her acting and modeling career, Nora is a Certified Travel Advisor and owns and operates her travel agency Travelkunst LLC. Nora has a B.A. in Hospitality & Restaurant Management as well as a B.A. in Business Administration.

She loves languages and speaks and writes German, English and French fluently. She has combined 12 years of dance experience in Ballet and Ballroom Dancing, is a former competitive swimmer, trained in classical piano and practices Taekwondo and Kickboxing.

Nora is an avid plant & animal lover and spends her free time in her kitchen pursuing her passion for cooking and sourdough bread baking. 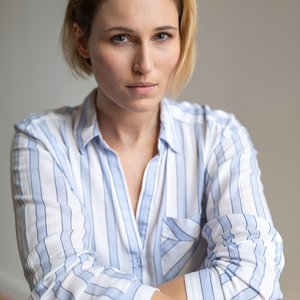