Hi! I'm an actor originally from Mumbai, India and now in Vancouver, Canada.

I have experience both as an actor on mainstream television and behind the camera : first as a project supervisor for a film and then as a creative director with a television production house.

While acting is my first passion, I believe it is my time spent behind the camera that makes me uniquely capable of helping other fellow actors !

I believe in the sense of community this platform brings to our industry and am eager to bring my skills, insights and experience to the table for your benefit.

Happy to read , rehearse, provide input or feedback -if asked! whatever the need of the hour may be. Remember, its all about YOU! So tell me what you want and I will follow your lead. I am here for you and excited to be a part of your journey as an actor .

My instant reader beacon will be on but if you wish to book a specific time or discuss anything in advance feel free to email me on:

I am an actor originally from Mumbai, India and now based in Vancouver, Canada. I have been acting in (Indian) television since 2003.

I was the lead in two shows, both on Star Plus - A leading Indian GEC for Star India networks - now a wholly owned subsidiary of the Walt Disney Company India:
The first was a children's thriller "sssshhhh koi hai...trikaal" character: BIJLI/SAMEERA. It was an action-oriented role with a dual identity. You could say I was the first female action hero on Indian television. For this role I was nominated for ‘Favorite action hero’ for the Star Parivaar awards in 2004.

The second was as the lead in an afternoon daily "Saarrthi”, character: BHUMIKA. For this role I was nominated for and won ‘Favorite Devraani’ for the Star Parivaar awards in 2006.
I was also the guest star on episodes of various popular shows on both Star Plus and Sony tv. Among those some shows of note are C.I.D and Aahat on Sony Entertainment Television – a part of the Sony Pictures Networks India.

TV Commercials done: Life buoy gold, Birla gold cement, Castrol, SBI personal loans (unaired).
Where ever possible, I have tried to be involved with theatre, workshops , classes and any form of creative expression.

Apart from acting, I have always been a writer. All through my years in university in Mumbai I was a weekly columnist for a youth page- 'Channel Y' for the Mumbai Newsline- The Indian Express.
I have also been a contributor to the weekend edition of the Financial Express in India.

In 2009 I moved behind the camera for a number of years. It began with working as the Project Supervisor for a Hindi feature, titled Tere Mere Phere (released in India Sept 30, 2011). I was involved with the project from its inception i.e. scripting, pre-production, casting, filming to post production and final print and release.

I followed this up with working as a Creative Director with Neela Telefims (the makers of Taarak Mehta ka ooltah chashmah - A top billing daily comedy on SONY SAB a GEC for Sony Pictures Networks India) : where I was responsible for new content development and show packaging .
Assignments pertaining to writing, creative consultancy, project development, set up or packaging on a project basis are always welcome.
However, I have realized that acting has been and will be my first passion. I aim to have as wide a reach as possible in today's global market scenario and am excited to find out where my journey as an actor will take me next.

I am currently looking for representation in Vancouver, Canada. 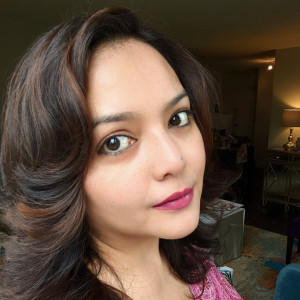 Had some connection issues for about half of the time, but once we were able to get on, she was very nice "
"