Hi there!
I'm an Aussie actress based in LA (NYC and Austin/San Antonio local hire). I have a flawless American accent, along with British, Australian, and New Zealand accents, and can help you with any of those for your scenes. I pick up other dialects easily, too.
I love reading for auditions, and putting all my focus on supporting your performance. I have experience in assisting with casting pre-pandemic and have had plenty of practice as a reader over Zoom for friends' self tapes during the pandemic! I'd love to read for your auditions and help you to get the takes that you're happy with.
I'm open to taking direction from you, sharing my personal feedback or notes if you'd like, or simply reading as a scene partner and allowing you to focus on your approach to the scene.
Training: Stella Adler Studio of Acting (Conservatory, 3 Yr), New York, NY; additional training listed on my Actors Access resume.
Break a leg! (Or as we say in Australia, chookas!)
Katherine

Katherine Taylor is an Australian actress. At the age of 19, she moved to New York to train at the Stella Adler Studio of Acting's 3-Year Conservatory, where she also completed the Shakespeare Intensive. She was selected as an Ian Potter Cultural Trust grantee during her first year, and was granted an Assistantship (work-study) position during her second and third year.

She has appeared in the Screen Australia short Glory (2007), the CW Seed comedy series JoJoHead (2016), and the indie feature Beyond the Sky (2018). She can be seen in the upcoming HBO mini-series Untitled Lakers Project (2022).

She has performed in numerous theatre productions, including Macbeth, The Merchant of Venice, Vinegar Tom, Apartment 3A, A Man With Five Children, The Golden Age, Bombshells, Call This Number, the Broadway Cares/Equity Fights AIDS Shakespeare Benefit, and improvisation ensembles. She served as an Adler Outreach (now Arts Justice) Ambassador with Phoenix House Academy in Los Angeles to provide a free actor-training program for teens in alcohol and drug recovery. She is also a trained pole dancer. 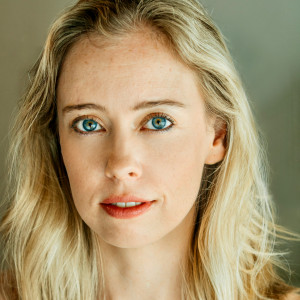