Hi I'm Joel and I am in love with this process. Dedicated to bringing out the best YOU you can be.

Highly skilled in improv, physical, and vocal comedy as a former touring member of The Second City Chicago. Acting training at one of the leading acting schools in Los Angeles at Lesly Kahn & Company.

As a television writer, filmmaker, actor, and producer myself I would be happy to offer feedback on script analysis, and building strong character choices. Credits include: The Many Saints of Newark (HBO Max), Hot Date (PopTV/Netflix), and a dramatic role in the upcoming season of The Chi (Showtime).

Looking forward to bringing out your talents.

Joel Boyd is a comedian, writer and actor his audience has described as “visceral, witty, and real”. Originally from Milwaukee, WI he honed his comedy and acting skills in Chicago working at such staples as The Second City, Laugh Factory, The Goodman & Steppenwolf theaters. He broke through the scene as a "Just For Laughs New Face of Comedy" in Montreal in 2018, as well as became a crowd favorite in some of the country’s top tier stand-up showcases. Among his credits are guest star roles for DROP THE MIC (TBS), EARTH TO NED (Disney+), HOT DATE (PopTV/Netflix), and INSIDE JOKES (Amazon). He is most notably known for his award-winning dark comedy mental health web series, SAD-ASS BLACK FOLK, of which he is the co-creator, star & co-director. You can also see him in the Sopranos prequel film, THE MANY SAINTS OF NEWARK. 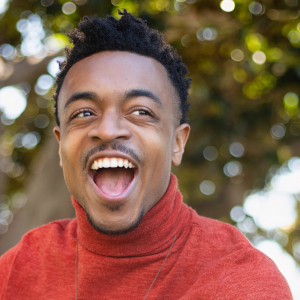