Helen Stirling-Lane is a trained British actor, voice artist and singer, based in Poole, Dorset. She is proficient in a variety of accents and character voices, having provided voices for audio plays and books for many years. She has directed and voiced books available on Audible- including Young Demon Keeper, which she directed, voiced and edited. She also has her own audio production company - Sounds of Thunder Ltd.

As well as acting Helen directs and is currently researching and developing a stage play set in a World War One prison camp.

Helen Stirling-Lane is an actress, known for Brutality 2, Brutality and Twisted (2017). She is a trained actor, voice artist and singer, having studied Theatre at Manchester Metropolitan University, and is based in Poole, Dorset.

Since returning to acting in 2011 she has built her stage work up and has performed many leading parts, including that of Lear, at the Stockwell Playhouse, in 2019. She is a jobbing actor, who is disciplined and easy to work with and enjoy the freedom of improvisation as it allows her to engage with an audience. 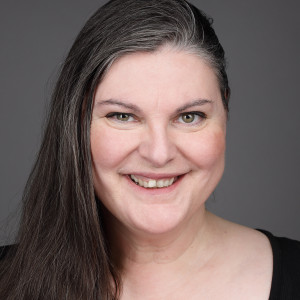 We had technical difficulties with our laptops but she seemed sweet "