Hi! I'm a NYC native that started in theatre and transitioned to film, working behind the scenes learning all aspects of production as well as in front of the camera (which is where I'm the happiest.) I'm presently in the Midwest where I met my husband (also in production).

As a character actress , I run the gamut from serious to quirky. From web series, shorts and features to dozens of commercials, voiceovers and hosting while continuing to travel for creative projects, would love to help you with whatever you need to work on in any way I can.

If you want to setup an appt time, feel free to drop me an email with WeAudition in the subject line : indyheidione@gmail.com
No project is too small.

Either way, go get 'em and have fun! Thanks for stopping by.

A NYC native, Heidi Azaro is a seasoned actress that started in theatre and transitioned to film, having worked alongside her brother behind the scenes adapting to various positions, learning all facets of production.

Working on a feature in the Midwest resulted in getting hitched there, while also adding dozens of commercial credits and voiceovers to her resume and expanding into narration. 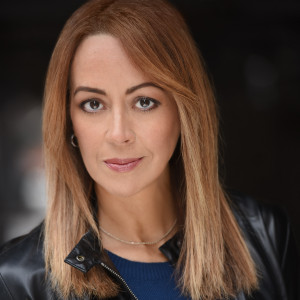