I have an actor and playwright based out of Chicago.

I have worked professionally as a stage actor for 7 years and have recently started working in film/tv.
I have also taught Acting and Theatre Appreciation at the collegiate level.
You can see me in season 10 of Chicago Fire.
I have an MFA in Acting from the University of Arkansas, I've studied at the American Shakespeare Center, and I've studied at The Second City.

I am also fluent in Spanish, including reading in Spanish.

I would love to help you get some great takes by finding the truth and the heart of your piece.

Debbie Baños (she/her/hers) holds an MFA in Acting from the University of Arkansas (Fayetteville), has worked with Chicago theater companies such as Babes with Blades, Halcyon, Victory Gardens, Teatro Vista, Still Point, and Erasing the Distance, and has recently had her network debut on Chicago Fire. When she is not acting, Debbie writes about family, love, and immigration as a first-generation American and proud daughter of immigrants. She has written two plays, a solo show “American Side Efectos” and a one-act play “Escape Velocity” developed at the Chicago Theatre Marathon. "Escape Velocity" was included in the 24-hour Women's Theatre Festival of 2018. “American Side Efectos” was developed through a grant with the National New Play Network, received an ALTA (Alliance of Latinx Theater Artists) Award nomination and was hailed as “a triumphant solo show full of anger, humor, and heart.” In 2021, she collaborated with Colombian director Esteban Arévalo Ibáñez for a sold out run of "American Side Efectos" in The Edge Off-Broadway in Chicago. Debbie is represented by 10 Talent. debbiebanos.com 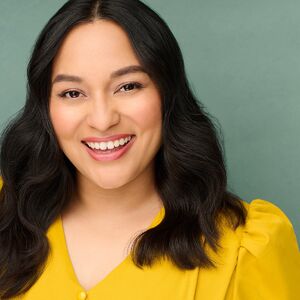 Debbie is not only an excellent, intuitive reader and talented actor who understands how to analyze a script, she is also great at offering helpful adjustments. I would definitely use her again to help with recording my sides with short notice. "
"

Debbie is a wonderful reader and offered great feedback and notes. Thank you! "
"

It was so nice working with Debbie! She's great with feedback and so supportive! "
"

Debbie is a marvel!! She gave so much I wasn’t expecting. Her theater background is a gift. She offered a rich and interesting perspective. She’s the real deal!! "