I am an Adelaide based actor (South Australia, Australia). I am available for reading lines, self tapes, advice etc. Albeit, with an Aussie accent.

You may also know me as 'The Late Bloomer Actor' from the podcast of the same name. A podcast about actors and for actors, not just late bloomers like myself, but we certainly focus on that. I interview a myriad of guests, from fellow late bloomer actors, to industry guests such as agents and casting directors, to learn more about the acting journey for all actors, regardless of where they're at in their journey, or where they started. I can bring the learning from my podcast to the audition space and provide those insights into your self tape.

I also run a Facebook group in Adelaide called Adelaide Actors & Extras, where I put my knowledge to good by helping others improve their acting journey, and understand the complexities of the process.

As a shift-worker, my availability varies, so I can quite often find the time to assist, even if it is a late night session for you and you have morning deadlines etc.

My acting background. I was a late bloomer taking up the journey 8 years ago when I turned 40. Even though, I've been on screen since my 20's as an extra (biggest claim to fame, being directed by George Lucas himself in a scene for Attack Of The Clones. I have now progressed and regularly perform lead and support roles in indie and student films.

I will work with you, and what you need. My bio doesn't espouse any major acting ideologies or philosophies, I act, as I do. My acting is based on realism as trained by Jeff Seymour, aka 'The Real Life Actor'. I will take a scene with you and make it work in my role as your opponent actor........... exactly as it happens in the audition room, or more importantly, on set.

I look forward to meeting you and being a part of your journey.

David John Clark was born in May 1973 in Adelaide, South Australia to parents Dennis and Ronda. David spent most of his childhood travelling around Australia in a caravan with his parents and younger siblings Peter and Naomi.

Whilst living in Sydney he got his first taste of acting as an extra in the booming movie industry of the 1990's, including a small role in Star Wars 'Attack Of The Clones' of which he personally received direction from the great George Lucas. Little did he know then, that 20 years later this would be his calling.

Come his realisation that he was now in his forties, David stepped up and began various acting training courses in Adelaide from 2013, including 12 months of training with Actor's Ink; development by agents Nick and Carina at AAA Talent; mentor-ship by Gregg Apps (Casting Director Sydney); and also trained with Jeff Seymour of The Real Life Actor (USA). David has gone on to become a well known and respected actor in the South Australian film and television industry.

David is your Police Officer, Teacher, Doctor and father figure type, but can draw on his experience living in different states and working with many different people and cultures when needed. His acting style is naturalistic, drawing on life experiences for character development. David is also a competitive bodybuilder and has competed in several Australian state championships.

David is married to Kellie Clark since 1999 and they have 3 sons together, Rohan, Aidan and Connor. 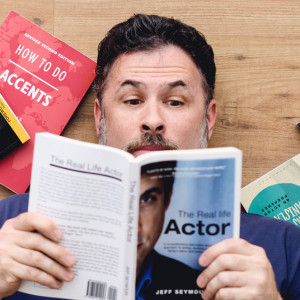 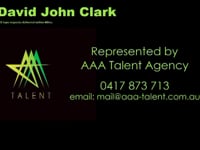 Great presence, calming energy. Fantastic reader with good insight without feeling pushy or overbearing whatsoever. Definitely improved my audition and would recommend and will read with again! "
"

David is a great reader, flexible and accommodating. Gives helpful feedback too! "
"

Wonderful to work with, responsive and patient. Great job. "
"

David was an excellent reader. He was also very helpful when asked for feedback. I'll definitely be on the lookout to work with him again. Thanks David! "
"

Wonderful reader! Thanks so much for reading the scene with me many times and providing helpful feedback. "
"

Such a great reader and amazing accent! Perfect for a love/break up scene haha "
"

David is a true professional, it was such a pleasure to have you as my reader. Thank you for really bringing it on my audition and being patient when I messed up my lines. The helpful tips were welcome as well. Definitely recommend David to any actor out there who needs a great reader to rehearse or self tape with! "
"

I was David's first request! He did a great job for his first time reading, and will only get better with more experience "