Vegas native based out of LA
SAG-AFTRA
B.A. in Theater from UC Berkeley, Howard Fine, UCB and Groundlings trained
Repped by Cutler Management

Hailing from the city of entertainment, Las Vegas, Nevada, Christina is a triple threat actress who began performing at an early age. Throughout her high school years, she resided onstage for more than 8+ consecutive productions, landing her first major supporting role as a freshman, playing the role of Mishkin in the Neil Simon play, Fools. During her junior year, as a result of her performance in the play, Mulan, she was scouted by a film director for her soon to be first supporting role in a film, HiStory. A few of her most notable performances during that time were the roles of Juror #8 in 12 Angry Men, Chi-Fu in Mulan, and her leading performance of Ms. Strict in the musical, Zombie Prom, which landed her the award of Best Actress in 2009.

Christina later went on to attend UC Berkeley in pursuit of her undergraduate degree in Theater, and found her way onto the stages of familiar Bay Area venues such as, Shotgun Players and Theater Rhinoceros, in addition to numerous university productions. Some of her most notable roles were those of Ginny in Just Like A Dog written by Michael Kroll, the role of Cherry and Teen Girl in two of UC Berkeley Music Department's annual award winning musicals: C.H.A.N.G.E., where Christina was awarded her own solo act in a musical vignette, and New Year's Kiss, written by Sam Wineman, as well as a stand up act with the Theater 4 Charity One Act Showcase: I'll Flux Your Capacitor, and two rounds of the TDPS Director's Showcase. During her time at UC Berkeley, she also completed her study under the Summer Training Congress in Acting at the prestigious American Conservatory Theater in San Francisco.

After graduation, Christina inadvertently began pursuing acting professionally when her auditioning schedule for Film and TV facilitated her permanent move to Los Angeles in 2016. Since that time, she has been cast in numerous leading roles in Film and New Media such as, Elia in Tomorrow Will Be Better, Calin in Plastic Smile, and recently landed the series regular role of Katie in an upcoming pilot titled, Discovered. Additionally, she has studied acting with notorious teachers such as, Howard Fine, Steve Eastin, and Improv at Groundlings and UCB, landed representation across the board, and has her hands in many up and coming projects, with plans to direct and produce works of her own. It is clear that we can expect good things from Christina. 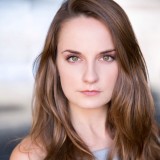