Chabris has recently filmed featured roles in two studio films. Indie films, 'Glamour' and 'Lily', within which Chabris plays the lead, are due for festival release later this year, and last year Chabris featured in a minor recurring role in BBC's The Capture.

For two years running, 2017 & 2018, Chabris has been a “ABC Discovers” top ten finalist in the American network’s UK talent search 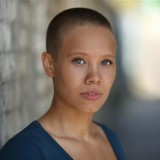