Hello! I have 15 years of theatre experience and 6 years of film experience. I moved to Albuquerque to pursue a career as a full time actress and have been working in film consistently since my move.

Outside of acting, I work as a stand-in and photo double to gain set experience and work with directors. I've worked on major productions such as MACGRUBER, BETTER CALL SAUL, BIG SKY, DR.DEATH etc...

I have a Bachelors degree in Film Studies and can help with scene work, character development and script analysis. Once I read lines with Billy Zane(TITANIC, BACK TO THE FUTURE) and he said I was so helpful, he had me hide on the set during filming in case he needed to call line!

Over the past two years I've become extremely knowledgable about self-taping. I have tips about backdrops, lighting, and nonverbal communication.
Last month I booked two jobs directly from tape!

Alexis Berent is an actress based in Albuquerque, New Mexico. She was born and raised in Michigan and began acting at the age of 8 performing at local community theaters. In high school she started to turn her focus to working in film and began acting in local indie short films, as well as continuing her career in theatre. She attended Blue Lake Fine Arts Camp each summer from 2012-2015 to study acting, with a focus on Shakespeare for two of those years. She went to Eastern Michigan University from 2016-2020, earning a B.S. in Electronic Media and Film Studies with a minor in Theatre Arts. While in college Alexis acted in eleven short films, two commercials, three plays, anchored a news segment and co-hosted a public broadcast talk show. As an active member of the collegiate television station, E-TV, Alexis became President during her last semester. In her free time she helped produce short films with her friends for the Detroit 48 Hour Film Project, winning the awards for Best Trailer and Best Fantasy film in 2019. She was crowned Scream Queen at the Detroit Horror 48HFP for her role in Simon Says. In 2020 she moved to Albuquerque for its booming film industry. She is now signed as an actor with Mitchell & Associates Talent. 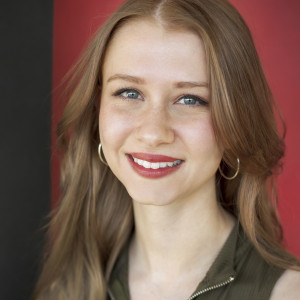